Indian sitarist and composer Ravi Shankar died yesterday at the age of 92. He helped bring the music of India into the mainstream with collaborations with rock stars like George Harrison to classical musicians like Philip Glass. He are some of the recordings made by Shankar that are available to MCLS library patrons. For more Ravi Shankar at the library visit http://artsdivision.wordpress.com/2012/12/12/the-music-of-indian-sitar-master-ravi-shankar/

Bangla Dhun/ The Concert for Bangladesh

Hands down, this epochal concert at New York’s Madison Square Garden — first issued on three LPs in a handsome orange-colored box — was the crowning event of George Harrison’s public life, a gesture of great goodwill that captured the moment in history and, not incidentally, produced some rousing music as a permanent legacy. Having been moved by his friend Ravi Shankar’s appeal to help the homeless Bengali refugees of the 1971 India-Pakistan war, Harrison leaped into action, organizing on short notice what became a bellwether for the spectacular rock & roll benefits of the 1980s and beyond. Though overlooked at the time by impatient rock fans eager to hear the hits, Shankar’s opening raga, “Bangla Dhun,” is a masterwork on its own terms; the sitar virtuoso is in dazzling form even by his standards and, in retrospect, Shankar, Ali Akbar Khan, and Alla Rakha amount to an Indian supergroup themselves.-allmusic.com

Melody is the essence of Indian music-there is no harmony as Western ears would expect-here the instruments of the symphony orchestra are used individually or in unison to develop, imitate and discuss the thematic ideas expounded by the sitar. The rhythm of Indian music is immensely complex and subtle, being organized in cycles ranging from 3 to 108 beats and, one would imagine, almost impossible for a large band of musicians untrained in Indian music to follow. But Shankar has written the music out in such a way that a marvelous freedom of rhythm is achieved. In Concerto for Sitar and Orchestra the ear hears only the continuous undulating melody, the complex, almost hypnotic rhythms which have entranced so many lovers of Indian music, with the added instrumental color of a Western symphony orchestra.-Susan Regan 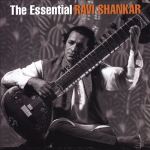 With over 90 albums to his credit, the task for those who wish to investigate the recordings of India’s master musician Ravi Shankar can be a daunting one. Therefore, the Legacy/BMG Essential Ravi Shankar fills a welcome place in his catalog and serves as a starting point for the novitiate. There are 20 cuts on these two discs that range over most of the sitarist and composer’s shelf, from his early Angel recordings where he played mostly Indian classical music, to his later recordings for Private Music, to his lone Columbia album, The Sounds Of India, in 1968. Along the way,  Shankar is featured in many settings, from solo to performances with large ensembles of traditional Indian musicians, to his collaborations with violinist Yehudi Menuhin from the gorgeous West Meets East recording, to his recording with George Harrison, to his work with Philip Glass and numerous other musicians on Passages. Through it all, Shankar is consistently in the classical framework, whether he is improvising on ragas or performing other compositions. The sound here has been completely remastered and the liner essay by Hank Bordowitz is both informative and compelling factually. This is the real intro to Shankar that has been needed for such a long time on CD.-allmusic.com

Mantrum: Chant of India is a very smooth and delicate recording of sacred Sanskrit and Vedic prayers. George Harrison produced this set for Ravi Shankar. In the liner notes, Shankar states his intention to preserve the intense spirituality of the chants and to give them universal appeal. Shankar’s style and diversity allow him to open doors that are closed to other musicians. The instrumental accompaniment adds depth and soul to this recording. Shankar’s compositional and sound-design styles add atmosphere. Harrison’s deft touch allows the music to develop and maintain its own integrity. Among records of this nature, this one is special. It will appeal to fans of Nawang Khechog, Jonathan Goldman and Sheila Chandra. -allmusic.com

With a recent focus on Indian music taking a foothold on the Rough Guide series, it was only fitting that the grand ambassador of Hindusthani music would get a retrospective of his own. Taking a somewhat surprising turn here, the compilers have stuck with a number of relative rarities highlighting periods of  Ravi’s career, but not highlighting the more noteworthy performances and collaborations. The album opens with “Kathakali Katthak,” a 1989 composition for a theater troupe. Moving on, “Transmigration” hails from the British film Voila, and a rendition of “Mishra Piloo” pairs Shankar with his premier tabla compatriot, Alla Rakha, for an extended, ponderous work. Two dhuns hold the middle of the album, with “Dun Man Pasand” paying tribute to the city of Paris and “Devgiri Bilawal” allows some of Ravi’s trademark high-speed runs. “Reflection” comes from the film Transmigration Macabre, and somewhat obviously has a reflective atmosphere, with somewhat unusual rhythmic structures filling out the mood but keeping the whole a bit off-center. “Raga Patdeep” is mixed with a high-speed gat in “Sitarkhani Taal” for another of the signature displays of virtuosity that help to display why Shankar is an undisputed master of the instrument.-allmusic.com

A collaboration between an avant-garde modern classical composer and a traditional Indian/Hindi composer/performer seems as unlikely as ice hockey on the River Styx. However, Passages is a collaboration between Philip Glass and Ravi Shankar and it works quite well. Shankar’s smooth style fits nicely with Glass’ dissonant orchestrations. There is a great deal of technical data involved here. Both of these artists have long taken intellectual approaches to music. Thus, the liner notes are a bit heavy-handed. The music is brilliant. The symphony dominates the soundscapes, but Shankar’s atmospheres are integral to the success of this project. This CD will appeal to fans of John Cage, Terry Riley, and Steve Reich.-allmusic.com

Rare and Glorious draws from the archives of Saregama, Ravi Shankar’s longtime Indian record label, to compile a two-CD set of eight ragas with a total running time of 135 minutes; the tracks range across Shankar’s career, with the earliest one, “Raga Hansadhwani,” having been first released in 1962, and the most recent one, “Raga Shudh Kalyan,” in 1988. Five of the tracks run 19 minutes or more in length, allowing Shankar time to explore the themes and gradually develop the dynamics of a complete raga. The sitar player was already over 40 when the first of these recordings was made, so he is heard as a mature musician practicing his art in full flower. This kind of music is not really susceptible to a “greatest-hits” selection, but many of these tracks are notable not only for the accomplished playing but also for their return to availability on this release, since they previously only appeared on long out of print LPs. Thus, the album justifies the words of its title, containing music that is both “glorious” and “rare.”-allmusic.com

One of the early works of art created for the West by the Grandfather of World Music. This album stands as an early attempt to teach the curious western listener about the complexity and beauty of Indian music. Composer Alan Hovhaness provides some rather thorough liner notes describing the systems involved in Indian classical music (with the focus clearly on Hindustani forms), and goes into some detail on the finer points of the four ragas performed (Maru-Bihag, Bhimpalasi, Sindhi-Bhairavi, and Pancham-se-Gara, which is played during the piece titled “Dadra,” actually a tala). Throughout the album, short lessons in the forms and techniques are given by Shankar himself before the various pieces are performed. For sheer musicality, something like The Genius of Ravi Shankar might be a better choice for a look at the earlier years, but for a historical document of both Shankar’s amazing abilities, as well as his love of spreading the word for his music and teaching others, this album is perhaps better. For collectors, both albums would be wonderful additions to the collection, as early examples of World Music making its way into the non-native markets quite successfully. Give this one a number of listens for the music itself, and maybe a spare just for the history in it.-allmusic.com